The 2017 population estimates indicate that Lane County is the fourth most-populous county in Oregon and the third-most populous metropolitan statistical area (MSA) after the Portland and Salem areas.  The county’s 370,600 residents are concentrated within a relatively small region around the Eugene and Springfield urban area. Sixty-nine percent of the county’s residents live in incorporated cities within a 30 mile radius of Eugene, argely along Interstate 5.  The remainder of Lane County’s population is located in rural areas including the corridor between Florence and Dunes City on the Pacific Coast, and the Oakridge area in the Cascade foothills.  Lane County’s population grew 5.4% between 2010 and 2017 compared to 8.1% statewide, ranking it the 18th fastest growing county.

The age distribution of Lane County’s population has a higher proportion of its population in the young-adult (20-29) age group. The higher concentration of young adults is easily explained by the fact that the University of Oregon and Lane Community College enroll thousands of out-of-county people. 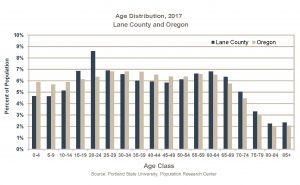 The statewide and county age distributions have two distinct high points, the age group that includes 55 to 64 year olds and the age group that includes those 25 to 39 year olds.  The former represents the baby-boom generation and the latter, the millennials.  While baby-boomers are reaching retirement age, the millennials are in the early stages of their working years.  The result may be a temporary skill shortage as more people retire than there are skilled people to replace them.  How serious this skill gap will become is uncertain.  Either way, the aging of the baby boomers should create opportunities for younger people with the right skills and education.